Durmitor National Park starts just across the border. What can I say? It is a feast for the eyes. The road across northern Montenegro follows the Tara River for many kilometers. Besides the magnificent scenery there are curved tunnels without lights. Pieter’s eyes no longer adjust quickly from sunshine to absolute dark so it was a little scary each time, especially as some oncoming cars did not see the need for having their headlights on!

And I made a mistake with navigation which resulted in us going along another scenic road which ended in a blockage good enough to stop a tank. The correct road was a little further north.

Why do Muslim countries have to be so dirty? From the border on there was much more rubbish along the roadside and piled in the villages.

We stopped in Pec (Peja) for the night. I am the one who goes into hotels to check them out. I was definitely not impressed! I walked into Reception cum restaurant and was looked at blankly by 4 men at a table. There was no-one there to help except maybe one of those men. I had forgotten what it was like not to be seen and be totally ignored unless I insisted on not being ignored. The next hotel was much more friendly. Dinner provided a similar experience. Everyone, all men, stared at me like I was from outer space. At least Pieter was there to order the meal and pay for it. It is tough when you have to force someone to pay attention to you. There were very few women on the streets, presumably all barefoot and pregnant in the kitchen.

The town itself is a hodge podge of buildings, new, old, under renovation, under construction, tumbling down and poorly maintained but still in use. 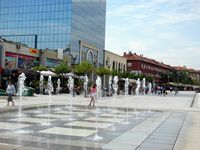 Pristina was very similar. The difference was in the people. There were lots of women in the streets, very few with head scarves and some in shorts. Women were also ‘seen’.

A short distance from Pristina we had a very big scare. I wanted to look at my cell phone to check the day and couldn’t find it. The major problem was that I knew my passport was with it. We went back into Pristina and parked in the same spot. One of the young men who worked in a shop there was very certain he had not seen anything drop out of the car. He had also not seen anyone take anything from the car and he was watching it constantly because it is so unusual. His friend could speak English and escorted us to the police station to see if the passport had been handed in. It hadn’t. Then I had a bright idea. When we got back to the car he phoned my cell phone, it rang from the cubby hole where I was sure I had put it but when I searched there I couldn’t find it. Now knowing it had to be in there I felt around the sides, the bottom and the top. The cell phone and the passport were caught by an elastic band at the top and a small shelf at the back. No wonder I hadn’t seen it earlier! I was so relieved! Once again people proved to be helpful and thoughtful. There are some bad eggs but on the whole humans are nice people.

I said we would be back and we have actually returned. This time we decided to stay in a hotel as it is hot and the campground is 17k from the centre. The hotel was a short walk from the centre, Macedonia Square. The square and surroundings are being renovated. Museums are being revamped or newly constructed. Statues are everywhere. Prices of coffee reflect the location.

The day we left was remarkable. First Pieter had, at management’s request, done a decoration for a small plate. Once his drawing is put onto the plate, the plate will be hung with many others in the bar. The owner was very, very happy with the result and gave us 2 lovely little sheep’s wool dolls dressed in regional style. He also took us to Toyota to have our car serviced.

Toyota very kindly fitted us in but we had to wait for a space to become available. While we were waiting the Marketing Manager, Ana Dimevska, approached us and said she was so impressed with our travels that Toyota would give us a free service. Our FIRST sponsor in 8 years. We were extremely grateful and will never forget this. Toyota Service is always great but this just beats all.

Next we stopped for the night at a motel with an attached campground. There were hot showers, electricity and level ground. There was no charge that we discovered. Amazing. 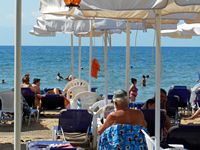 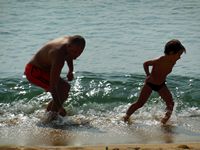 In an effort to try and slow down our traveling we spent time at 2 different beach resorts. The weather was perfect and the water looked lovely but was a bit cool for me. I also caught up on the chores. Unfortunately the campgrounds did not have washing machines. Back to hand washing sheets! 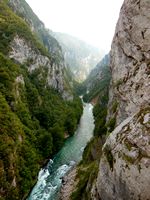 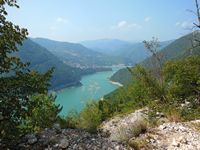 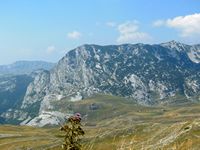 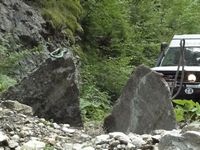 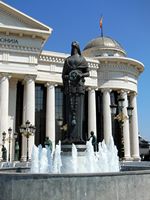 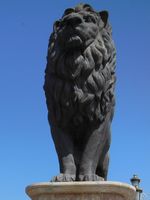 Back to Bosnia Europe Home 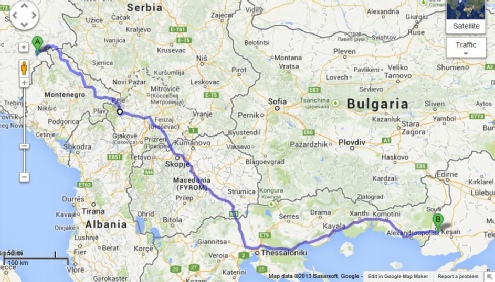