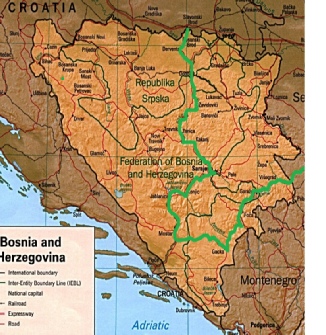 Bosnia and Herzegovina show the signs of war. Abandoned buildings and service stations are all along the road. Some, not many, have bullet holes. The scenery once again consists of green hills and valleys. Muslims, a third of the population, are not prominent. Muslim men dress like other men, including with no shirt. The women have scarves, long dresses and long pants. Non Muslim women  sometimes wear very skimpy clothing.

We found it exceptionally difficult to get coffee without sugar. The first cup of coffee not only had sugar but 2 extra sachets. With the help of other English speaking customers we did manage to obtain sugarless coffee and had the words written down for us. This was at the first castle we stopped at. At the next castle we knew to make sure they understood - no sugar. Well, there was maybe only 1 spoon of sugar in the coffee and no extra sachets. At least it was drinkable. The castle ruins had been mentioned in the LP and we went by them to have a look. They were small and not very impressive but the scenery was worth the drive.

Visoko was the reason we came to Bosnia and Herzegovina. This is the site of the Bosnian Pyramids. There are apparently five of them. They are covered in top soil, trees and plants. People are also living on the sides. They were discovered in 2005 by a Bosnian anthropologist Sam Osmanagich. Two International Conferences in 2008 and 2011 concluded that they were not natural phenomena and their existence will change history books. Apparently they were finally internationally recognised as pyramids a month ago. Specialists have been brought in from many disciplines. Tests have been carried out on the materials used in building the pyramids by geo-radar and thermal analysts, radio-carbon dating analysts, geologists and many others. The result is that the structures are 12,000 years old which makes them older than the accepted dating for the Giza Pyramids. (Quite a few experts put the Giza Pyramids at a much earlier date). The Pyramid of the Sun is larger than any at Giza. The pyramids are orientated to cosmic north and have other mathematical and astrological relation ships. In common with many pyramids the Pyramid of the Sun has an energy beam coming from the top. For more information go to www.bosnianpyramids.org.

We first visited the outside of the Pyramid of the Sun. This is quite a steep climb. Volunteers were busy removing top soil. They want to remove some all the way to the top to show that it is clad entirely by concrete blocks. The concrete is superior to modern concrete.  Before we went up we had coffee without sugar. Obviously there are many European visitors so they understand that no sugar literally means NO sugar. Next came the visit to the tunnels. These start about 3 K from the Pyramid of the Sun. They had been filled in with river mud for quite some distance. They are not yet cleaned through to underneath the pyramid. The air inside is very good for human health. It is fresh because the height of the tunnels varies causing differences in air pressure which keeps the air moving. Modern miners should study this. The air is 24% oxygen, much more than normal. There are many more negative ions than normal as well. The number increases the further you go from the entrance. There are underground streams. When there is a change in flow, e.g. a stream dividing into two or two streams joining, there is a ceramic monolith. These are considered good places to meditate. It was a very interesting visit. 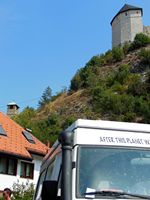 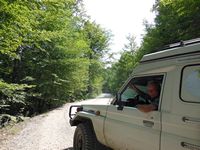 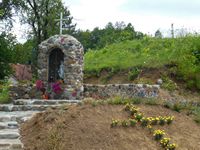 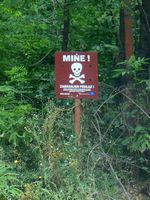 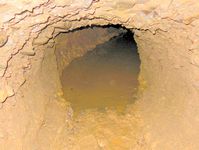 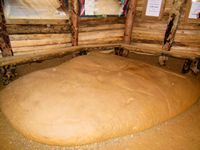 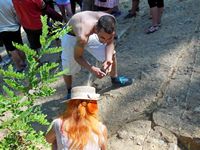 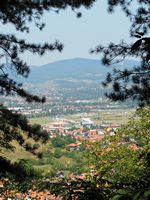 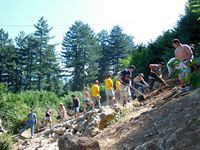 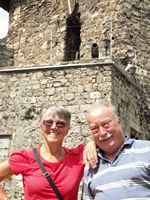 Two days relaxing by the river near Jablanica Lake were good for our souls. The river provided a great way to cool off.

Mostar has an Old Bridge that was destroyed in 1993 during the civil war. It has since been completely rebuilt and is a great tourist attraction. The GPS naturally expected us to drive over itThe coffee was good. At least with so many tourists sugar is not automatically added.

Blagaj has such a lovely campsite with good facilities that we decided to stay for a day.  The owner gave us plenty of information on local sites and was extremely helpful.

A visit to Velagic House, built in 1766, was interesting. It is a complex of 3 houses, a guest house, a mill, a granary and artificial water channels from the Buna River.  The water channels ran the mill and provided cooling for the cold store room. This room had channels for the water on two sides. Since the temperature of the water is 7 degrees so close to the source, the room was cold even at the height of summer. There is very little open to the public as it is still a residence and used as a hotel. There is a guide though who is full of information.

The other easily reachable sight is the Tekke or Dervish House situated at the entrance to the cave from where the source of the Buna River flows. It is one of the most powerful sources in Europe  at 43,000 l/s. 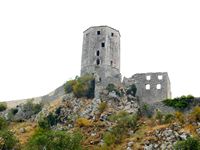 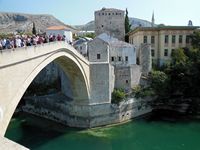 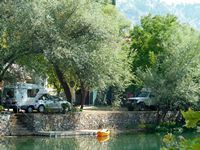 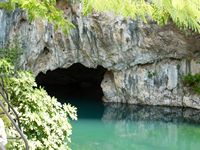 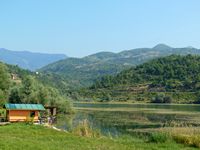