This time we stopped in Thessolonika for  coffee. The pedestrian street is a great way to people watch. The attitude to sellers who walk around with their wares provided us with an interesting incident. The restaurants do not allow them to tout their wares to restaurant customers. When ever one tries, they are chased off. This happened with a Chinese woman selling junk jewellery. But some customers, 3 older women, wanted to look so they waved the seller back. The seller quickly came back when no-one was looking, crouched down so she would not stand out and made some sales. Meanwhile several other sellers came along but were shooed away. One black woman was upset and pointed to the Chinese seller but she was still told to go. She hung around despite being told several times to go. She will probably put this down to discrimination which is a pity but a normal reaction of a black person. In any case, once the Chinese seller had gone, she tried her luck again. The 3 women were totally uninterested in her wares. 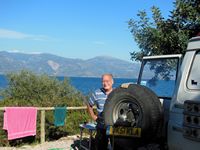 Serbia is expensive to drive through because you have to buy one months 3rd party. You can drive along the Albanian and Croatian coast but that involves borders and a windy coast road. Instead we went by ferry from Patras in Greece to Venice in Italy. We took the camping on board option and enjoyed hot showers and restaurant food. 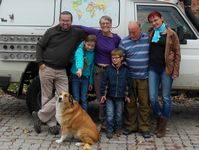 Since we were in the area a visit to Igor and Blanka in Ljubljana was a must. The local schools had asked pupils to bring in their old books. These were documented and some of them displayed at the central library. Erasmus, their oldest boy, had won a prize for his contribution. The night we arrived was the presentation. Selected books were on display in the main library. Some of the books came from the beginning of the 20th century and about 6 had been handed in by Erasmus. All the displayed books were in excellent condition, especially considering their age. They have obviously been kept with loving care. 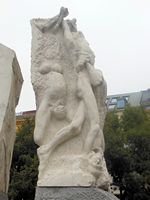 Many year’s ago Pieter had expressed a wish to visit Vienna. This time we went there. The statues of life in the midst of death were striking. Otherwise it seemed like any other European Old Town to us, marred by wet weather. We also had our car towed away! We had parked beyond the No Parking area, or so we thought. Unfortunately there was another No Parking sign a little further along that truly marked the end of the zone. This is the second time we have “lost” our car. Getting it back was tedious. It involved a train journey to the end of the line, a taxi and a fine.