We were very tired by the time we arrived in Shymkent. At least we knew where a reasonable hotel was. By this time we were both had colds. I spent a day in bed sleeping it away – well a good part of it. 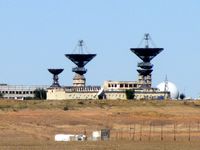 We wanted to go to Ashtraskan as per our original plan but the route goes through anyway so we stayed on main roads to Volgagrad in Russia.

By the time we reached Aktobe we needed a break. We found a reasonable hotel with a restaurant under the stadium. There was a match on Saturday but there wasn’t much noise. We headed for the roof of the hotel to take a peek at the game. A policeman was on watch to prevent anyone from doing just that. Then it was on to Russia. 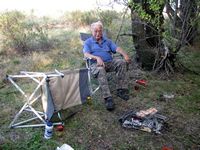 We were warned at the border to register with the police within 5 days and told it was possible to do so in the nearby town. What a waste of time! The queue was long and English speaker’s non-existent. A translator was phoned to assist. We were then told that Pieter as a Hollander didn’t have to register but as an Australian I had to register within a week. I also needed an address but the hotel we stayed at could organize the whole process. Hours later we left having accomplished nothing.

Volgograd is definitely worth a visit. It is on the route of tour busses but not in the Lonely Planet. The reason for coming here is to see the Mamayev Monument. The monument celebrates the victory of the Russians over the Germans at the battle of Stalingrad during WW2. Stalingrad was strategic in the supply oil from the Caucasus.

Adolf Hitler is quoted as saying ”If I do not get the oil of Maikop and Grozny then I must finish [liquidieren] this war”. The Russians won because of their refusal to surrender. Instead they forced the Germans into urban warfare with bitter fighting for every ruin, street, factory, house, basement and staircase. Eventually Hitler abandoned his troops. This led to a weakening of his Eastern offensive and became the turning point of the war.

The Monument consists of a statue of a woman representing ‘The Motherland Calling’, 200 steps up from the bottom of the hill (representing the 200 days of the war), an eternal flame, many graves and other related sculptures. The lady herself is huge at 87 metres from the plinth to the tip of the sword (just under 30 stories) and dominates the skyline. Other tall statues are 1. Spring Temple Buddha 153 m (incl. 25m pedestal and 20m throne): 2. Statue of Liberty 93 m (incl. 47m pedestal); 3. The Motherland Calls 91 m (excl. plinth); and 4. Christ the Redeemer 39.6 m (incl. 9.5m pedestal). Copied from Wikipedia.

The Lady is very atmospheric and awe inspiring. I could feel the reverence accorded to her and what she represents. We enjoyed waking around and absorbing the sight.

Volgograd provided an initiation into Russian urban driving. They speed from one traffic light to another then run the traffic light or brake hard. This results in many bumper bashings. We were no exception. Pieter drove the same way. The car in front actually dithered about going through the orange light. Pieter braked hard and managed to stop but not before he had banged into the car hard enough to push it through the light. Just as well a little money sorts out such problems.

Two days easy driving brought us to Moscow. In 1972 (last time I was in Moscow) tourists were not allowed to enter the Kremlin and the queues for Lenin’s tomb stretched across Red Square. Now there were no queues and tourists can visit the churches inside the Kremlin walls. I don’t really remember GUM (a shopping centre) but I do remember that tourist had to pay dollars at special tourist stores.

The weather was wet and cold but we still managed the obligatory photo outside St Basil’s. The Kremlin churches are richly decorated with icons painted or mounted on the walls. They were after all built for the Tsars. The State History Museum is very well set out it’s just a pity there is so little English. Each room is decorated in the style of a different region or period making the building itself interesting. Then there are the train stations which are world renowned for their beauty.