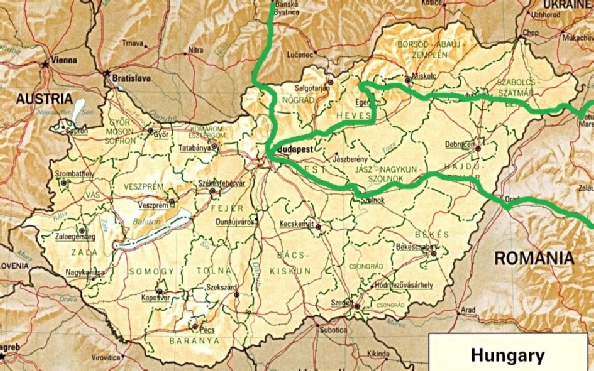 3 countries in 1 day is easy in Europe. We had to drive through Slovakia to reach Budapest in Hungary. The eastern side of Slovakia is mountainous or ay least has high hills from the Carpathians. Winter ski resorts abound. Now if they could become as famous as Austria they would do well. A lovely days drive. And the sun shone as soon as we were over the High Tatras. What more could we ask?

The weather continued warm and sunny in Budapest. The campground was run by a very friendly Niclash, the facilities were good and the city was easy to get to by public transport. Pieter rested for a few days then we headed for the old city of Buda on the west side of the Danube. It is relatively quiet. There are tourists, the usual souvenir stalls and restaurants but not on the same scale as other old cities. We spent a few hours wandering around in the main square. St Nicolas was quite impressive,especially the restoration work that has been done.

Another day I went to Pest on the east side of the river to Hero's Square and Vajdahunyad Castle. The square is immense. Statues of heroes form a semicircle. The heroes date from 11th century to emphasize the long history of the Magyars. The castle is an eclectic mixture of styles, including Gothic and Renaissance. Each addition was built in the latest style. The Metro Line is the oldest in Europe, having been built in the late 119th century. The stations are quite short but probably still have the original wood and tiles. The carriages are more modern probably mid to late 20th century and have been updated with some of the latest technology. The old headquarters of the Secret Police is near one of the stations. I did not visit the museum. I know what terrible things humans can do to each other, I don’t need to see the details.

Eger was started as a church by St Stephen first King of Hungary around 1005 AD. Later it was fortified as it became an important cultural centre. Its claim to fame is repelling the Turkish invaders in 1552. The hero was the leader of the 2,000 odd defenders, Istvan Dobo. There were around 35,000 Turkish soldiers. It was the first western city to hold out against the Turks. The role of women is included in the murals and statues. They show scenes of women poring tar and boiling oil over the invaders and throwing stones. Of course the Turks returned and took the town but not for 44 years

I wanted to see the Lipizzaner horses so we went on a trip to Szilvasvarad. The road wound through wooded hills, quite lovely. Lunch for Pieter was well cooked pork ribs which he really enjoyed. I chose Bab Soup (at least that is what it sounded like) because I didn’t know what it was. It was cold cherry and raspberry flavoured milk with fruit in it and a huge dollop of cream served in a soup bowl. Not bad though not at all what I expected. There were no Lipizzaner horses to be seen but it was still a nice outing.

Back to Poland Next to Romania 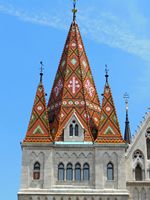 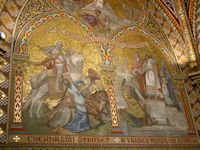 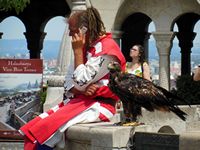 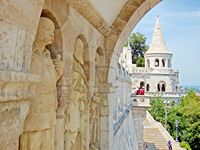 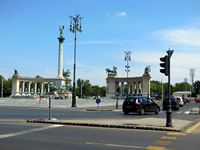 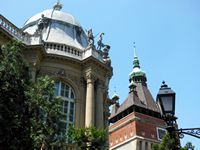 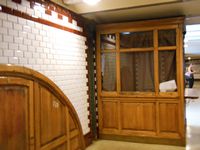 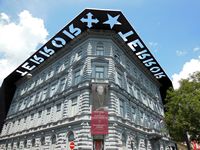 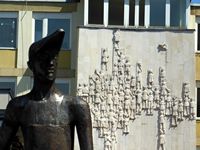 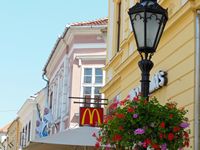 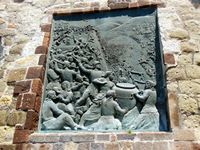 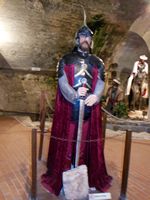