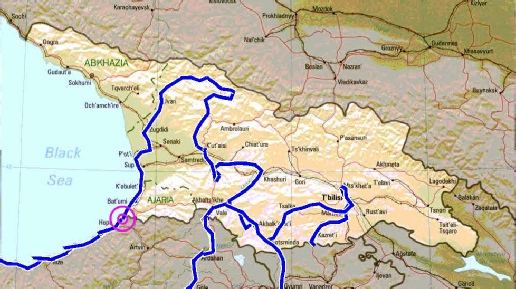 A snack of tender beef stew, bead and tea in Turkey kept our lunchtime hunger at bay while we went through the border. The queue was long and confusing. There is no space on the Turkish side. The trucks took one lane and backed up through the tunnels. The other lane moved slowly. To go through the border cars had to go around, do a U turn on the one way road and queue up to return to the border going in the opposite direction to the traffic! The borders themselves were relatively fast.

Before the border there are still many small businesses selling clothes and bedding. Georgians buy these to sell back in Georgia. The same like the last time we came through in 2007. Some things have changed. Most of the abandoned buildings have disappeared. There are lots of new houses or signs of renovation or maintenance. Corrugated iron is still in use for outside walls and rooves though. Technology meets the third world in Georgia. Cell phones are everywhere. The old man on his horse and cart has one. The lone herder in the hills has one. Of course the Yuppie in the town also has one. The driving is bad. Cars either go too slow or too fast, then they either don’t overtake or wait until it is dangerous to overtake before doing so. The license plates use western script and numbers. Georgian script would be unreadable in the rest of the world. 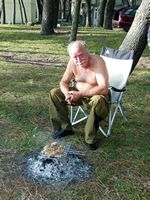 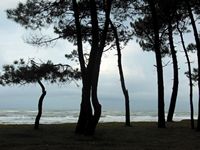 We found a nice quiet spot by the Black sea for the first braai in a long time and good nights sleep.

When ever I think of Georgia I will think of the colour Black. Black hair, black clothes, black silt coming from black rocks and rushing down rivers to the black sea. The mountains are mostly black rock and the rivers are grey with the silt.

The road to Mestia was tarred and generally good, although work was still being done on widening it in places and removing parts of the mountain side to prevent rock slides. Mestia is a pleasant town and definitely on the tour bus route. If tourists wanted to go further they had to take a local bus. Eventually an improved road to Ushguli will be finished but it will take years. Tourists mean decent coffee. The Georgian food does not have much variety. It mainly consists of bread and meat. The flat bread can be plain or cooked with a filling of cheese, beans or meat. When the meat is bar-b-qued it is called shashlik. The veal version is the only soft meat. The other meats are tough. Naturally tomato and cucumber salad is available. Chicken is expensive.

Besides the spectacular scenery the reason to come to Mestia, high in the Caucasus, is to see the Svan defensive towers. Each family, which could consist of 30 or more people, built 1 or more towers inside a thick wall. For protection, the entrance to the tower was some twelve feet above the ground, with a ladder below that could be destroyed in the event of an attack. Inside, large, flat rocks lay beside the ladder holes, ready to be used as seals. There was also a house attached to the tower and other out-buildings inside the wall. The towers were built as protection against raids from the northern tribes and Ossetians to the east as well as during blood feuds.

The statue of Queen Tamara (1160 to 1213) is interesting. She is one of the venerated leaders of Georgia.  She was an only child of King George III and ruled with her father for 5 years and crowned at 18. Her claim to fame is repulsing Muslim armies attacking Georgia. During her reign Georgia became known as the Defender of the Caucasus.

Another foray through the mountains! Our next destination was Vardzia. There appeared to be two ways of getting there from Kutaisi. One via the main road and another via the mountains. The road via the mountains was on the tourist information maps and on Google Maps. The road was even on the Garmin map which is anything but accurate beyond Western Europe. Seemed good. The mountain road joined the main road at Akhaltsikhe some 100 or so kilometers away. It turned out to be a roller coaster ride through pools of water and slip sliding through quagmires of mud. We followed recent tyre tracks over patches of mud fortified with branches and a concrete bridge that had come away from one side of the ravine and been repaired with thick branches. Eventually the tyre tracks disappeared and the old track could hardly be seen through the grass. It was still on the GPS though. We went on until the huge rock slide before acknowledging that we would have to retrace our route, something Pieter always likes to avoid. There were a few houses along the way and cows, presumably at their summer pasture. The scenery was great. 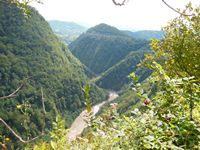 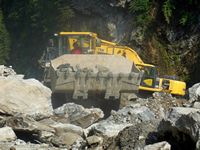 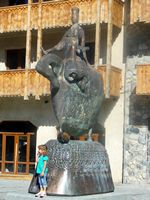 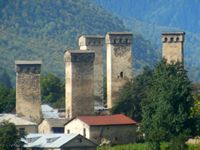 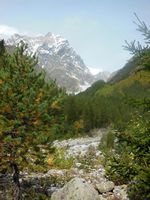 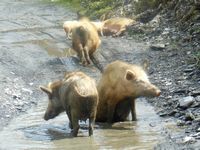 Leaving Mestia we took the road to the nearby glacier, then to the ski station. Finally we found the right road to Ushguli. The road is being widened and eventually tarred. At least they have made a start. Personally I think it will take years. There is a lot of bridge building, mountain removal and reinforcing to be done. The scenery is fabulous. The road winds up and down mountains, through valleys, villages and gates. The road wasn’t too bad, around 20kph. 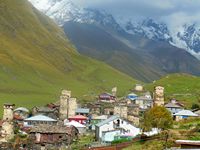 We arrived in Ushguli for a late lunch but had to wait as the cafe was very busy feeding day trippers from Mestia. We decided to move on and found a good spot to camp for the night.

The road deteriorated after Ushguli, much to Pieter’s delight. Our speed varied from 5 to 20 kph. We caught up with a Toyota stuck in a mud slide. The mud covered about 3 metres of road but was over a metre thick in the middle. There were 2 cars with Yoshi and Le-at stuck in the mud and Ofer and Tony trying to pull them out. They had hired the cars and only had a tow rope which they had already broken trying to pull the car out of the mud. Our equipment came in very handy. I took a look and suggested that they dig the tyres out properly, put the sand ladders fully under the wheels and then drive forward. If they insisted on going back, then the back wheels would have to be freed. But what does a mere woman know? Men know better.

There followed several attempts to free the car. They couldn’t manage with our steel rope.  Some of the mud was dug away from the front tyres. Pieter changed places as our Toyota was stronger. This time the steel rope broke. They tried with a sand ladder under one of the front (drive) wheels, with Pieter pushing the car with a branch (it broke) then with the high lift jack ( a new use for it). By this time a tour group of 6 4X4s had arrived. They had a new tow rope but nothing else. Lots of manpower to the rescue. They all got together and tried to pull the car out using man-power! Then they went to work digging out all 4 tyres, putting the sand ladders properly under the back tyres and almost under the front tyres. Pieter pulled the car out with ease. Next step was to place freshly cut branches across the mud (yes we have an axe) and to fill the holes left by digging out the tyres, with rocks.

Pieter drove over the mud first and the other 8 cars followed. The road from then on was passable with one last river to cross.

The tour group were left far behind. They had to wait for everyone to go across obstacles before moving on. Obviously some inexperienced 4X4ers. The 6 of us spent the night talking, eating and sleeping in Ysageri in a private home. It had been a great adventure with wonderful people. 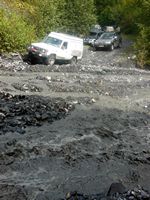 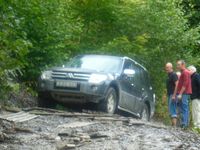 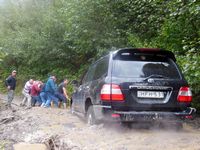 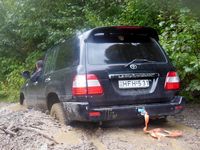 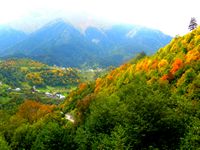 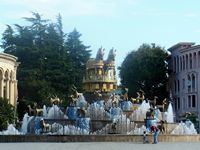 Time spent doing some financial admin that demanded attention. Got to keep the money rolling in.

We met a British couple who had tried to go to Ushguli from Ysageri on Saturday with their motor bike. There had been so much rain that the road was impassable. It had already snowed in Ushguli last Wednesday so I guess that is it for the season. We went just in time.

Vardzia is a cave town built by King George III in 1156-1184. It starts 100 meters above the valley floor and has 13 stories connected by a complex system of tunnels. There was a potable water supply, a sewerage system and over 3,000 caves that could accommodate 50,000 people at a time.

Pieter relaxed while I went up to look. There are still monks living in a section of the caves and a church with frescos. Most of the caves now have lost their outside walls and are separated from each other. Still, I enjoy exploring such sights. 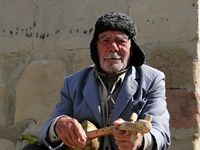 A lovely serene small old town. We asked for hotel but were told there was none but a room in a home in the old town was available. It was totally unsuitable for us. The bedrooms were on the second floor and the toilet in the basement. Not good for middle of the night forays. Heading out again we noticed a hotel sign right opposite the Svetitskhoveli Cathedral. It had an on suite, much better.

Mtskheta has been inhabited since 1,000 BC, It was a major trading post on the Silk Road and the capital of an early kingdom, Iberia, current Eastern Georgia, until the capital was moved to Tbilisi in the 6th century. It has been the religious centre since Georgia converted to Christianity around 337 AD. 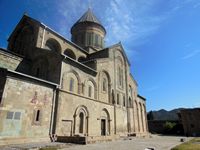 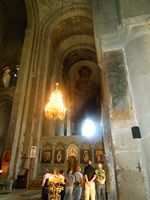 The cathedral has been renovated over the centuries. Alexander the Great had a hand in this. He restored the western section between 1413 and 1430. Several kings, patriarchs and nobles are buried in the cathedral. It is relatively plain but has a very high roof. 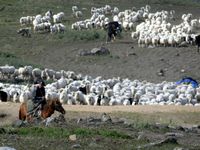 While driving through Tbilisi we noticed a number of modern buildings. We prefer the country side.

The last part of the road to Armenia is bad near border which is very quiet. 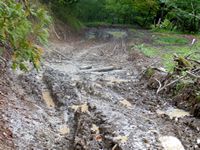 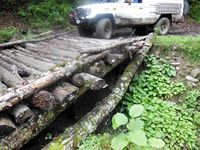 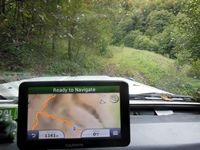 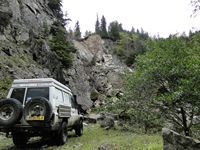 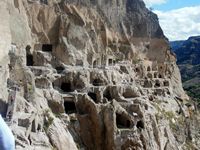 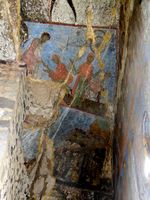 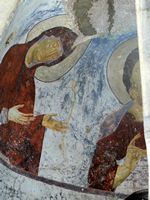 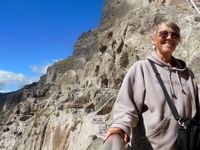 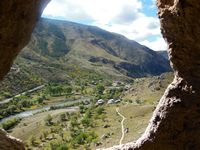