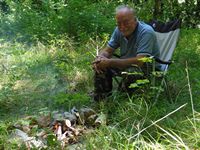 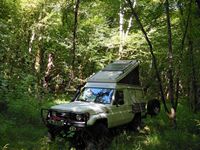 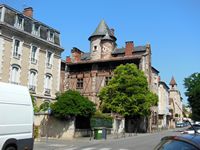 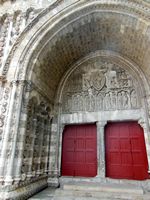 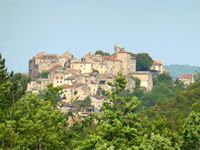 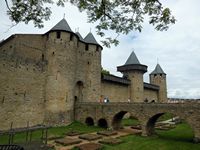 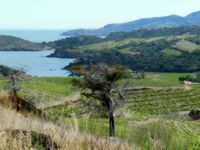 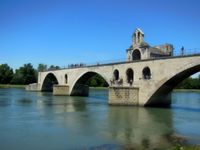 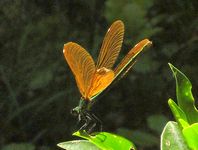 l air fares, a ferry to and from Corsica and staying in a campground for 3 weeks depleted our financial resources to such an extent that we had very little money until the next monthly intake. We found a magnificent place in a forest not far from Cahors. Lots of trees for shade, brilliantly blue or gold dragonflies, blackbirds among other birds and extremely peaceful surroundings kept us content. On average one car a day passed slowly by as the road is not conducive to fast driving. Except the day 6 cars drove past in 2 hours! Every few days we would visit McDonalds to check our mail. Otherwise we read, watched movies, did puzzles (me of course) or worked on the computer. Our new inverter is a marvel. We can charge both PC’s and a battery at the same time. Needless to say, the inverter will be going with us to Australia. Since we have to wait for money this is an excellent place to do it.

Back to Corsica Europe Home Next to Central Australia Second Instalment

We took a few diversions before heading north. First to Avignon to see the famous Roman bridge. Next to say goodbye to Cadaquez in Spain and last to Carcasonne back in France.

Cadaquez was so expensive that we didn’t do more than drive to the campground only to find out the cost of a night’s stay (over €42) and the cost of overnight parking (over €22) before heading back. OK, it is small, hemmed in by a national Park and very popular, so I understand the high prices. Unfortunately it is out of our league. At least this little side trip enabled me to buy over a year’s supply of my chronic medication. Everywhere else in Europe you need a doctor’s prescription. I have been taking these tablets for almost 20 years. I think by now I know all about them.

Carcasonne was full of memories. Mainly of Pieter Frank and David running around the walls of the castle almost 26 years ago. We had our usual coffee but with crepes instead of croissant. Crepes seem to be the local speciality. 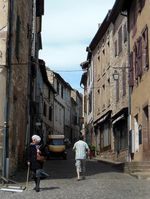 Next to Central Australia 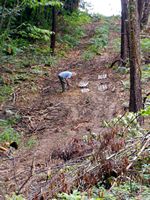 Eventually the falling trees and all those biting insects made moving on the better option. We found another lovely spot in a forest away from any possible falling trees. That night it poured with rain. Next morning when we tried to leave the track was very muddy as to be expected. The road up was quite steep and we didn’t make it first try. Every time we tried again using the sand ladders, green branches and old wood we ended up having to go back down to start again. Every time we tried the mud became churned up more and more. Eventually one part of the track which had been good became impassable. Pieter had to drive around. I watched dumfounded as he kept going on a very old track right to the top. F..  Why didn’t we see that to start with! Because we didn’t look for an alternative route. Idiots! 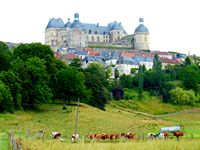 We are now in the Dordogne region of France where there are beautiful light coloured stone castles everywhere. We haven’t gone looking for them but there are so many you can’t miss them. After our small problem leaving the forest we decided we deserved a camp ground. We found a municipal campground in Excideuil. The price was right and we worked out that if we were careful with our spend on food (Eur 15 per day) we could make it through July. Our needs can all be met within walking distance. Aldi is close by and in the village there is a cafe with wifi. There is a market every Thursday and a castle (not the one pictured). Since we are staying here for a while I will definitely go to see the castle.

Our plans for the future have changed again. Europe is cheaper to live in than Australia and there is much more to see in a very much smaller area. Also Pieter doesn’t really like Australia. He feels it is far too regulated and the majority keep strictly to the regulations. Just like Holland and northern Europe in my opinion. There is also an issue with the air rifle which he likes to shoot. Australia is one of the few countries in the world where you need a license for it. We enquired about obtaining one but it seems quite difficult. Aussies seem to have the same reaction as the Dutch - it is a gun! Horrors! Take it out of my sight! Your going to kill some one!!!!!

There is also my chronic medication. It is freely available in Spain. Like Australia, it requires a doctor’s prescription everywhere else in Europe. This means a monthly visit to a doctor and explaining over and over again why I need it.

Therefore the Australian car is now back on the market. It is a matter of waiting for the buyer. Once it has been sold we will buy a caravan in Europe where they appear to be cheaper than in Australia. 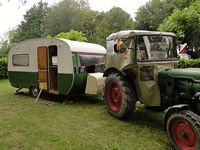 Well, we thought we had seen everything. That is until a tractor turned up pulling a caravan. The couple are from Germany and in their seventies. They had taken about 5 weeks to arrive in Excideuil. Unfortunately the tractor now needed a complete overhaul. A ball bearing in the main shaft had cracked. Several other repairs were also done. They left early the morning after the repairs were completed to go straight back to Germany. It will take a week at least to return home at a maximum of 180k per 10 hour day. “Never Again!” they said. The woman had to sit at the back exposed to the elements. That would have put me off straight away.

The waiting game is now in full swing. We are staying in Excideuil until October or until the Australian car is sold. We are enjoying being stationery with all the facilities within walking distance. The walking is very good for me. For the first time in 10 years I am getting some exercise. I had trouble with my adductor muscles to start with, quite normal these days. Then I shortened my stride and they have settled down. This is after years of taking longer and longer strides because you can go faster with the same effort by doing so. Still I am not about to walk a marathon anytime soon. We walk about 1.5 kilometers every second day either to Aldi or the cafe to use wifi and enjoy a cup of coffee. Its not much but it is at least better than nothing.

I went on the tour of the castle in Excideuil. It rained for part of the visit but not all the time thankfully. I was very lucky as there was a woman fluent in French and English plus a British couple who had a good grasp of French. This made it much more interesting. The tour only went through the castle grounds but gave some history and 'legends' of the people who lived there. The owner is staying there at the moment. Usually he lives in Paris. He inherited the castle from the previous owner, a woman who had no heirs. He was her lawyer. The only part he doesn't like is the costs of maintenance! They must be rather high, although I have been told that the council helps. The castle  started as a wooden Norman keep. In the 11th century it was replaced ramparts and a stone keep. Richard the Lion Heart laid siege to the castle 3 times in 1182 but could not gain access. It did eventually fall in a siege in 1351. Even so it changed hands quite often for various political reasons. There are two stone towers left with the barracks and  a house where the owner stays. The views of the town are great.

Eventually after 6 weeks Pieter started to get itchy feet so we went on a day trip to Terrasson, another medieval town. I like wandering through those old narrow streets.

We managed to see the old town of Perigueux as well. This is the closest large town and although we had been to the shopping complex on the outskirts we had not been into the centre. Again lovely to walk through the old streets and admire the fancy towers of the church.

It’s not just reading and puzzles that have kept me busy. I have now washed and waxed the car. This is not as easy as it sounds. This is the first time it has been done since we purchased the car although it has been washed occasionally. In Corsica we stood under a tree that dropped its flowers. These had hardened and stuck to the bonnet of the car. Tar was on the sides and then there was the normal type of dirt which is easy to remove. I had to use Vim for the flower residue. The bonnet took around 3 hours to clean. The tar came off with petrol. In all it took around 8 hours to complete. This was done in stages though. When the sun is out it can be very hot so I could only work before 12:00 or after 18:00. The longest stretch that I managed was about 2 hours. Then it was time to rest. The rain also prevented me from working some days. In all the time was spread over 2 weeks. That’s what I call taking it easy. I am now busy with the inside. That is even slower going as Pieter spends a lot of time in the back. Any way, that’s my excuse! I cleaned the stove as well. It is cast iron and the grease is not that noticeable. Grease had accumulated in several areas but is now gone.

Eleanor, the woman who runs the campsite is Dutch and married to a Frenchman. She is a friendly person and we have come to know Eleanor and Eric quite well. She is also an excellent cook. Since she does not eat many sweet things but still cooks for Eric we receive some of those delicious goodies. Pieter helped her with the cutting of vegetables for ratatouille and we have 2 pots of that as well. Gorgeous food.

It is now mid August and the middle of summer. So the winter woollies have come out! We have had a week of cold weather, sometimes 5 degrees at 6:00 am. It is chilly to say the least and at long last have replaced the double sleeping bag which we bought in early 2010. It is supposedly rated at -10 degrees, but at +10 degrees an extra blanket is needed. I would love to know how the ratings work, perhaps the manufacturers just pick a number. 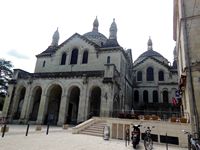 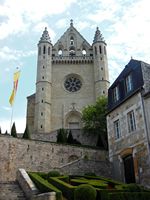 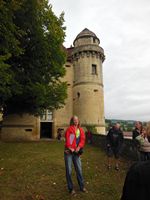 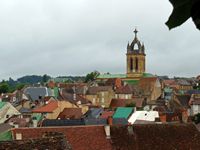 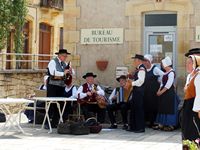 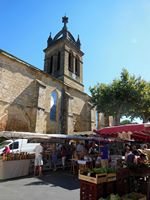