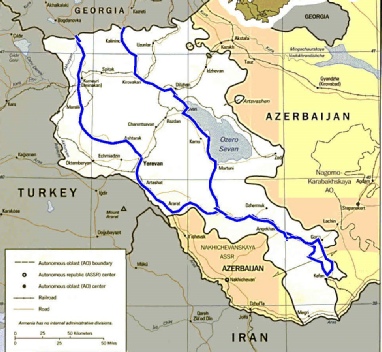 The border post is very quiet. Although it is the closest border to Tbilisi it is not used very often. The trucks going from Iran to Georgia generally go through Turkey. Despite being quiet it took over an hour on the Armenian side as they are not used to a UK registration documentation. We also had no Dram, the local money. The only place to change money is the insurance office where you also buy insurance and pay road tax. Euro and USD are accepted.

We thought the road in Georgia was bad. The Armenian road is appalling for the first 50k or so. I doubt the road in Armenia has been repaired since it was laid. They roads did improve from Vanadzor. There are some really good roads near Yerevan.

The country is poor by Western standards. There is industrial development, new buildings and many hotels. There are also abandoned relics from the Soviet Era. In Vanadzor we had Armenian coffee in a small restaurant. The same as Turkish coffee! Hate of Turkey showing through. There was a public loo nearby with throne but no water to flush it. The nearby market was typical, anything is available in one of the numerous small stores.

Local stone is used frequently for buildings and many houses have a huge stack of hay in the front yard, ready for winter. Potatoes were being harvested  during our visit. They were readily available from road side stalls. Customers bought them by the bag. Presumably to keep them going through the winter.

The written language is unusual. All ‘u’ or ‘n’ with various deletions or additions.

Lake Sevan is obviously a holiday area with many new hotels and restaurants.

The mountains tend to be rounded with dry grass. There are some rugged areas though. Generally just the type of landscape we like driving through.

We finally understand why cappuccino is always sweetened. It is made with an instant 3 in 1 pack! From now on we will always look for the machine before ordering it. Then we will order a double because too little coffee grounds are used for our taste. Double the price but great coffee.

Back to Georgia Next to Turkey

This was definitely the highlight of our trip. Tourism is active. There is a gondola which takes visitors from the bus parking lot to the monastery complex. The facilities include an up market restaurant with a proper coffee machine. Lovely.

The road to the complex wind down then up. Definitely not suitable for large tourist buses.

The Tatev Monastery complex consists of several churches plus the usual associated living requirements for the 600 monks that resided here at the monastery’s peak. The original church was built in the 3rd century over the relics of St Eustathius.

The cathedral is Surp Poghos-Petros, built in 895 to 906. The drum creates an sense of enormous height when inside.

The 11th-century Surp Grigor church nestles next to it. The third chuch, Surp Astvatsatsin (1087) sits above the gate-house.

Walking around the complex looking at the buildings and the panorama laid out below gave a sense of peace.

Back to Georgia Asia Home Next to Turkey 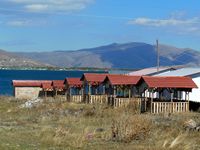 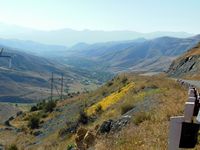 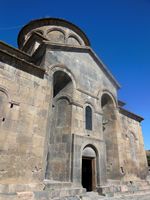 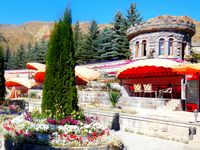 From Tatev we took the back road to Kapan. The road back seemed to have many more curves but it is the main road from Iran to Yerevan with many trucks loaded with fuel (we surmise). The army is very much in evidence along the Turkish border. Relations are poor between the 2 countries and there is no border post. The route to Turkey is back through Georgia.

We took a 2 night rest in Yeghegnadzor before continuing. Yerevan was a coffee stop on our way through. Except for Mother Armenia glaring at Turkey it did not seem to be very intersting. 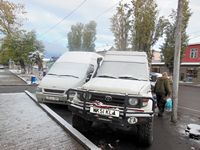 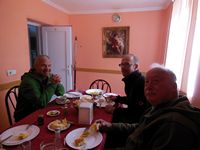 Georgia was COLD. It was snowing gently and we had had a long day so spent the night in Ninotsmindo in the only hotel in town. Micheal and Roman were there as well. They were cycling through Georgia and being Swiss did not mind the cold. We had dinner with them in what must have been the only open restaurant. Next morning we also had the hotel breakfast with them. They intended to continue their journey even though there was snow on the ground. 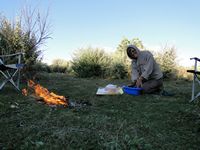 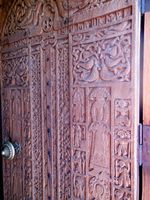 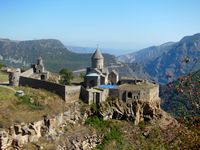 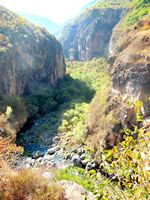 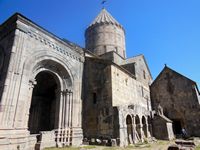 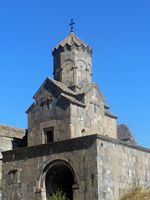